The Colt Cobra - Back-Up Gun with a Bite! 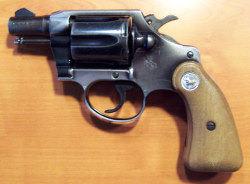 For many years Colt was the world’s preeminent manufacturer of handguns. In the early days of the 20th century, until after WWII,  Colt was the main supplier of handguns to the US military, federal and local law enforcement agencies, and private citizens around the world.  In response to demand for a more concealable handgun, in 1927 Colt introduced the Detective Special, which was an instant success. Weighing just 23 ounces, holding 6 rounds of .38 Special ammo, in a sturdy but compact package, the gun was soon in great demand.

After World War II Colt and Smith & Wesson began experimenting with aluminum frames to reduce the weight of handguns, which up to that time had been of all steel construction.  In 1950, Colt produced an aluminum frame version of the Detective Special, dubbing it the Cobra, and a new era for snubbies began.

Although externally identical to the Detective Special, the Cobra dropped the weight from 23 ounces to just 15 ounces. Frankly, worn on a gun belt the difference is hardly noticeable, but in the pocket or on the ankle, the difference is immediately apparent.  The first generation Cobra’s made in the early 1950’s had a full length grip frame, which extended all the way to the bottom of the wooden stocks. The front sight was narrow, and the rear sight notch was quite small. The ejector rod was short—too short to forcefully extract empty cases for a fast reload.  All of these shortcomings were addressed in the mid-1950’s when the second generation guns appeared. The front sight was made significantly larger, just like the ones on the Official Police service revolver of that day. The ejector rod was lengthened, to improve extraction of fired cases. In 1966, the final improvement was made, when the grip frame was shortened substantially. This allows very compact grips of various designs to be fitted to suit the user’s particular needs. 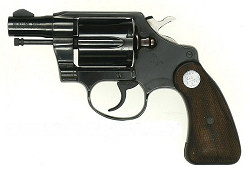 In 1973 the D-frame line, which included the Colt Detective Special, the Cobra, and the Agent were redesigned to “modernize” them. These last third generation guns have a heavier barrel, with a shrouded ejector rod, and tiny, hard to see low ramped sights. To me, they are far less desirable than the second generation guns, with their high visibility sights. My recommendation of the Colt Cobra as the premiere back-up gun assumes a second generation gun, which are easy to find and reasonably priced. The second generation guns were made from the mid-1950’s to 1973, and several hundred thousand were manufactured, so they are not hard to find.

Why, you ask, would I hunt up these antique revolvers instead of just buying a new one from some other maker? Good question, and I have some good answers. First, the old Colt holds 6 rounds, not 5. In essentially the same size package, more ammo is better. More importantly, the Colt’s have sights I can see. A front sight big enough to pick up quickly is the single greatest aid to high speed accuracy. If you only have 5-6 medium caliber rounds to fire, you’d better be getting hits with every one of them. That’s a lot easier with the Colts. The old-timers often preferred the Colts over S&W’s because on the Colt the cylinder rotates to the right, and the hand pushes the cylinder to the right (into the frame) to lock up just before a cartridge is fired. Theoretically, this gives a tighter, stronger lock-up to the Colt over a Smith & Wesson, which rotates counter-clockwise and is pushed away from the frame at lock-up.  I doubt that this is a big deal, but I have noticed that my Colt’s shoot very well for small revolvers. Finally, the 1950’s and 1960’s production guns featured very good fit and finish. The old Colt revolver action required a bit of hand fitting at the factory, which made it more expensive than some of its competitors. They are often much better made than current production guns.

Look up one of these second generation Colts and get acquainted with it. I think you’ll be pleased.