Dealing with Cross-Dominance Issues in Students 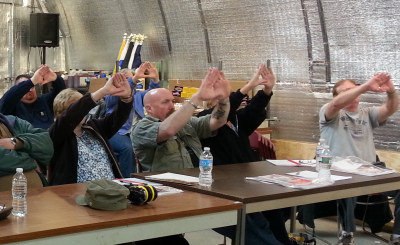 If you teach a large number of students like I do you will find a surprising percentage who are cross-dominant. No, that doesn’t mean they wear their spouse’s clothes to class. It means they are strongly dominant in one hand, but their dominant eye is on the other side of the body. An example would be a shooter who is right handed, but has a dominant left eye.

It is believed that 85-90% of the world’s population is right handed. However, about 2/3 of the population is right eye dominant, and 1/3 is left eye dominant. Only a small number, thought to be around 1% have no dominance in either eye. There are several simple tests an instructor can use to check for cross dominance issues. I’ll describe a couple of very easy ones here.

First, have the student make a small frame opening at arms’ length, by bringing the hands together. With both eyes open, have the student center a small object across the room in that opening. Close only the left eye, then open both. Close only the right eye, then open both. For one eye, the target object remained in the opening. For the other eye, the target object disappeared. The eye with which the object stayed in the frame is the dominant eye. An alternative method is to have the student center an object in the opening with both eyes open, then slowly bring the hands back to touch the face, keeping both eyes open. The opening will naturally be drawn toward the dominant eye.

On the range, the clue that the student is cross dominant is usually misses that impact the target a bit high but way off to the side. For a right handed/left eyed shooter, for instance, the hits will be high and to the left. Another clue can be discovered by watching the shooter while they fire. You may see the gun moving toward the shooter’s non-dominant side, or the head moving sideways as the shooter aims. If you see these clues, it’s time to perform the eye dominance tests described above.

With a shoulder fired weapon, such as a rifle or shotgun, really the only satisfactory solution is to learn to shoot from the shoulder on the same side as the dominant eye. I am not aware of any other practical fix for this with long guns.

With handguns, we have some options. One controversial method is to simply learn to shoot with the hand on the same side as the dominant eye. So, if you are left eye dominant, you hold the handgun in the left hand, which puts the sights right in front of the dominant eye. Bill Rogers is probably the best known proponent of this system.

Another method is to keep the gun in the dominant hand, but move the head to bring the dominant eye behind the sights. This can be done two ways. We’ll use the example of a right handed/left eyed shooter, for clarity. In the first method, the head is rotated on its vertical axis to bring the left eye behind the sights. This is sub-optimal, as it points the right eye off to the right side, reducing peripheral vision to the front left. It appears to work better to keep the head pointed forward, but tilt it to the right just enough to bring the left eye behind the sights. You have probably seen pictures of Jeff Cooper shooting a 1911 in a classic Weaver stance. You may have noticed his head cocked over to the right. This was because Jeff was right handed but left eye dominant, and used this technique.

A third option is to cant the pistol inboard from 15-40 degrees to bring the sights into the focal plane of the left eye. I am not a fan of this particular method.

Now that you know what to look for, I predict you will notice more cross dominant students. Now, you know how to help them.